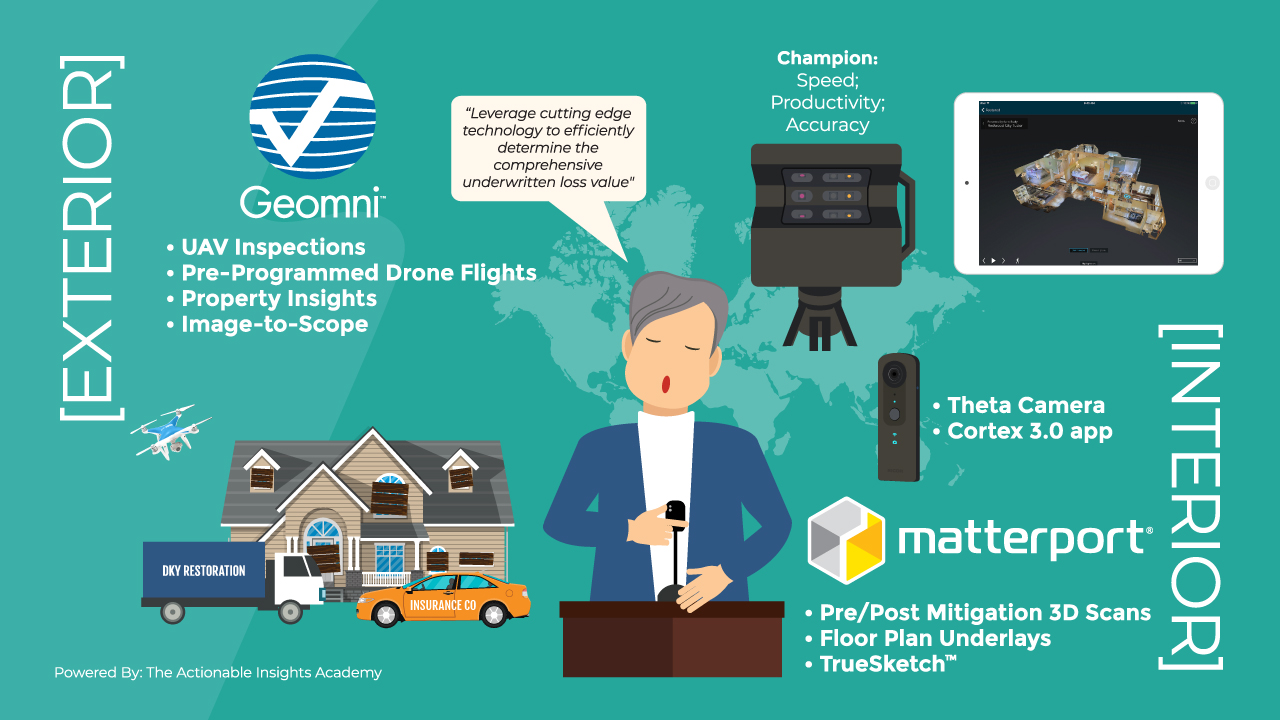 ***This course will stream live online! Tickets for the online course are the same ticket class/price as attending in person.***

3D scans and automated digital assets are rapidly rewriting the rules of noble claims settlement. Claims are getting processed quicker due to the fact that establishing a scope has never been easier. Driving to a property, meeting on-site, climbing on roof, and measuring rooms/staircases is all a thing of the past. Both Geomni and Matterport are equipped to generate and deliver supremely accurate Xactimate sketches for both the exterior and interior of the property.

At this event, we will explore both the pre-mitigation and post-mitigation scans, as well as best practices associated with commissioning 3D scans for both water and fire large losses. We’ll also be exploring new features, currently in beta and active development, with Matterport’s added support to the Ricoh ThetaV 360 camera and the Cortex 3.0 app that converts your 360º Views into 3D Scans.

THE SCIENCE:
We will make the acute connections between these digital assets and show how to quickly generate scopes that are complete, accurate and poised for approval without hesitation. As it relates to Matterport tours, we have spun off more scans than nearly anyone else in the restoration ecosystem. This course distills down 3 years of experience and thousands of scans into a hard-hitting list of do’s-and-don’ts.

These exercises are powered by our proprietary 3D Training Modules – this technology delivers a rich and engaging learning environment.

THE ART:
This course is equally applicable to staff adjusters, independent adjusters and contractors. These 3D scans transcend any particular claim bias – we are talking about ground truth data here folks. These rich and immersive digital assets provide space for claims professionals to write these sheets quickly and especially accurately.

OPINION:
In our opinion, too much credence and attention is given to the sketch aspect as it relates to Xactimate training. We believe that all claims professionals and contractors should be spending far more time generating sheets, not driving around in traffic inspecting properties on-site. Heading out to “reinspect” is a relic of the past. We train our students to leverage already existing networks poised to conduct drone and Matterport scans, subsequently converting that data into valuable digital assets.

Don’t be left behind guys – sprint with the machines, not against them.

Requirements:
Copious amounts of grit
Commitment to the pursuit of perfection

By using this site, you agree to our Terms and ConditionsGOT IT